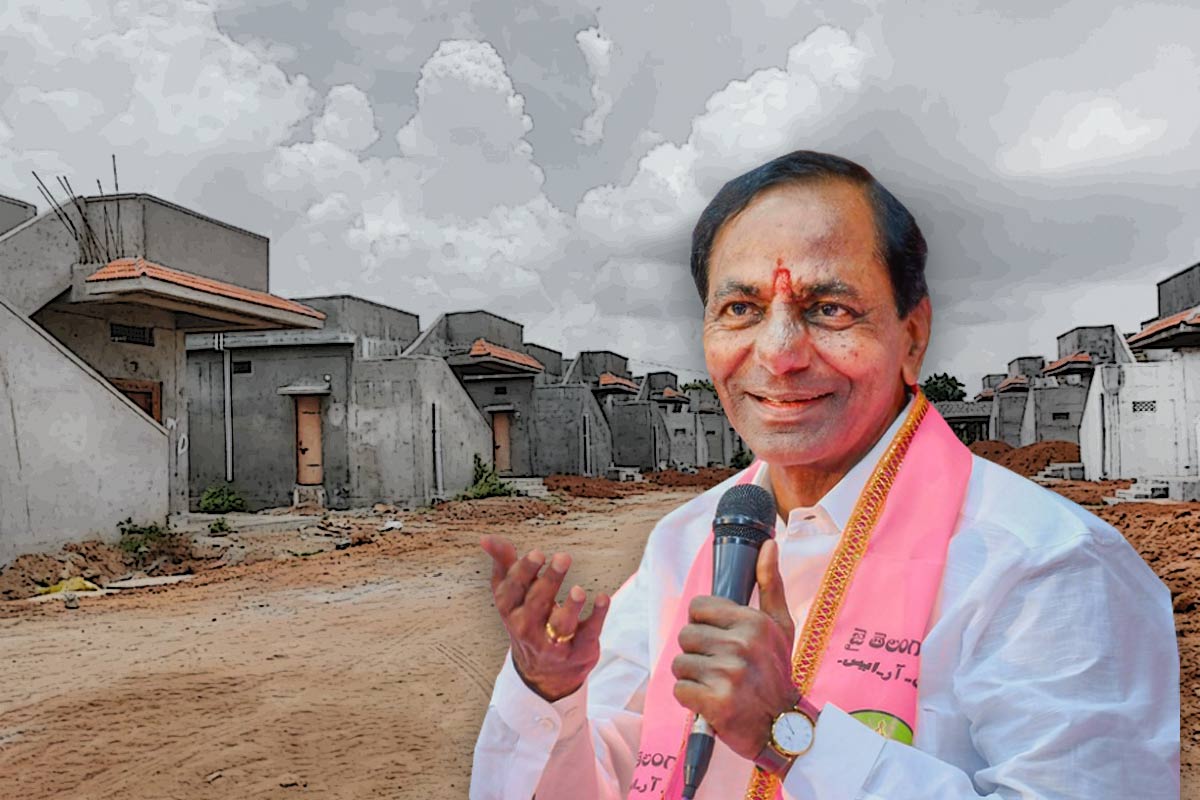 2BHK scheme: Data shows gain for districts patronised by KCR family While Narayanpet and Vikarabad have so far not received even a single 2BHK house, many districts that enjoy the patronage of the KCR family seem to have benefited. news RTI Data on Telangana government’s double bedroom housing scheme indicates that some districts may have benefited from the TRS party’s patronage. The 2BHK scheme is a dignity housing scheme by Telangana State Housing Corporation Ltd for providing houses for BPL families without pucca homes. It’s also considered the pet project of the TRS government led by KCR. RTI data shows that four districts which have constituencies represented by members of Chief Minister KCR’s family have got a larger share of the double-bedroom houses. Siddipet (represented by CM KCR and nephew T Harish Rao), Rajanna Sircilla (represented by son KT Rama Rao), Nizamabad (represented by daughter K Kavita), and Medak district, the native place of the Chief Minister, got nearly 23% of sanctioned houses in the state excluding the houses sanctioned in the GHMC limits. When it comes to construction too, these districts have got a larger share than most others. Fifteen percent of the total 1.14 lakh 2BHK houses constructed across 33 districts are concentrated in these four districts. Double bedroom houses constructed at Jangampally village of Kamareddy district (Image courtesy: Twitter/KTR) According to the scheme, 13,785 2BHK houses have been sanctioned for Siddipet district. While Rajanna Sircilla has 6,848 sanctioned, Nizamabad got 14,671 sanctioned and Medak got 4,965 sanctioned. Other districts have got a lesser number of houses sanctioned: Mahabubnagar got 7,584, Nalgonda 7,794 and Ranga Reddy district got 6,113 houses. Medchal, which is a district with a higher population, has got just 2,350 houses sanctioned. Among the four districts that enjoy the patronage of the KCR family, Rajanna Sircilla was sanctioned the least number of houses. While 6848 houses were sanctioned in this district, 3333 have been constructed. Speaking to TNM, Mahesh Konagala, All India Congress Committee member said, "Looking at the numbers- funds allocated and houses sanctioned, I am again made to feel that KCR is the CM for only 3 constituencies- Gajwel, Siddipet and Sircilla." When TNM asked senior Minister Talasani Srinivas Yadav how the number of houses per district was decided, he claimed that the sanctioning of 2BHK houses and the construction depends on the availability of land in the respective districts. “In some districts land is easily available and in some districts this is a major problem. Depending on the need in each district 2BHKs are sanctioned. Wherever the land is easily available the construction is going on at full-pace.” The data was collated from two different RTI responses received by Hyderabad-based RTI activists MA Kareem Ansari from yourti.in and Robin Zaccheus. When it comes to construction, 1.14 lakh houses have been completed as against the sanctioned number of 2.73 lakh across the state. Here too, 9,824 houses have been completed in Siddipet, while Rajanna Sircilla has 3,333 such homes. Nizamabad and Medak districts respectively have 2,141 and 2,245 completed houses. The district Komaram Bheem Asifabad saw construction of only eight houses. The number of completed 2BHKs in other districts are as follows: Peddapalli (262), Nagarkurnool (390), Adilabad (596), Mancherial (644), Warangal (835), Yadadri Bhongir (481), Medchal (677) and Mulugu (686) houses. Two districts – Narayanpet and Vikarabad – so far have no houses under the scheme. When asked why Narayanpet and Vikarabad have no houses constructed yet, the minister reiterated that land acquisition was the issue. Another district that has got a major share of houses sanctioned and constructed is Kamareddy which comes under MLC K Kavita. Kamareddy has 10,013 houses sanctioned of which 4,198 have been constructed. Mahbubnagar (3,657), and Khammam (5,343) also show a high degree of completion of houses under the scheme. TNM also found that only 18.17% of the completed houses have been handed over to people. Speaking about the delay in handing over houses that are ready, the minister said, “Identification of the beneficiaries is a time-taking process. The delay is due to this.” When asked if the elections had any role for the delay, minister Srinivas said, “TRS has no reason to wait for the elections to handover the houses to beneficiaries. For the TRS, the double bedroom houses aren't even an election plank and not something that can affect the outcome of the election.” READ: Nearly 1 lakh 2BHKs ready but not handed over: Is KCR waiting for elections? BJP spokesperson Kishore Poreddy while alleging favouritism by the KCR family towards districts patronised by them, said: “While a few districts gain, many others lose out due to the selective deprivation that they have to face.” Speaking about the high number of completed houses in Mahbubnagar and Khammam, Kishore said they are not TRS strongholds. “Giving more houses in this region will help the TRS woo the voters in this region,” he said. It is interesting to note that the TRS came to power highlighting the regional imbalance and had claimed that division of state would ensure more balanced development across the state. One of the double bedroom projects in the state (Image Courtesy: Twitter/KTR) In April this year, Telangana BJP chief Bandi Sanjay questioned CM KCR and sought answers for a 21-point questionnaire. One of the questions was how many out of the 2.91 lakh houses sanctioned by PM Modi for Telangana had been completed. Hinting at favouritism for districts associated with the KCR family, Sanjay asked: “How many 2BHK houses were built in Gajwel, Sircilla and Siddipet and how many in the other constituencies in the state?” Throwing light on why few districts get a better share in the deal, a source in TRS told TNM: “It all boils down to how good elected representatives are and how they exert pressure to get the works sanctioned and the money released. There are few leaders who are always at it and this ensures the work is done faster.” Also Read: Delays in construction and allotment take the sheen off KCR’s dignity housing scheme