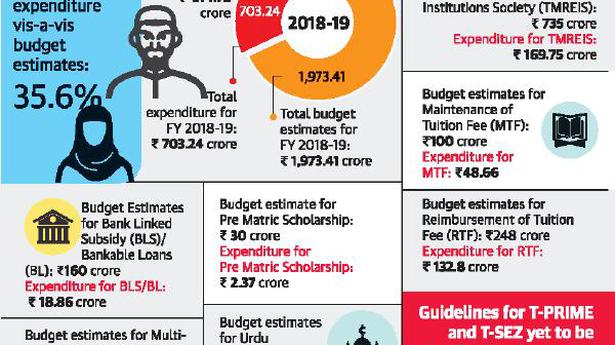 Minorities Welfare department has had no full-time secretary for almost a year Almost a year since the post fell vacant, the State government is yet to appoint a full-time secretary for the Minorities Welfare Department, which has had two secretaries holding additional charge. What’s more, the expenditure against the budgetary allocation thus far stands at at a meagre 35%. According to data obtained under the RTI Act by activist Kareem Ansari of NGO Yugantar, the budget estimate for financial year 2018-19 was ₹1,973.41 crore, but the expenditure as on December 24 stood at just ₹703.24 crore. Education hit While ₹200 crore allocated for the Shaadi Mubarak scheme is being spent under the green channel, data revealed that of the ₹735 crore earmarked for the Telangana Minorities Residential Educational Institutions Society, only ₹167.75 was spent. Not a single penny from the ₹25 crore earmarked for the T-Prime and T-SEZ schemes, which are intended to encourage entrepreneurship among those belonging to minority communities, was spent. The reason for this, according to data, was ‘guidelines not yet finalised’. The Telangana State Minorities Finance Corporation was able to spend only ₹18.86 crore out of the ₹160 crore earmarked for the small businessmen-friendly bankable scheme. According to data obtained under the RTI Act on November 20 in response to queries filed by S.Q. Masood, another activist, there are 87,496 applicants in 2015-16 in the Hyderabad district alone. No applications were called for in the subsequent years. The corporation is now clearing loan requests of amount which do attract a bank component. ‘Full-time’ solution Mr Ansari as well as senior officials working in Minorities Welfare Department agencies pointed out that there is a need for a full-time secretary for better functioning. “After Mr Jaleel (Syed Omar Jaleel) was transferred to Vikarabad as Collector, M. Dana Kishore was appointed (in-charge secretary). He was handling GHMC, HMWSSB and Minorities Welfare at the same time. That is too much responsibility for any officer. The current (in-charge) secretary, Benhur Mahesh Dutt Ekka, also heads Tribal Welfare. The department is now handing larger allocations and has several agencies. It is time that the government appoints a full-time secretary,” Mr Ansari said.