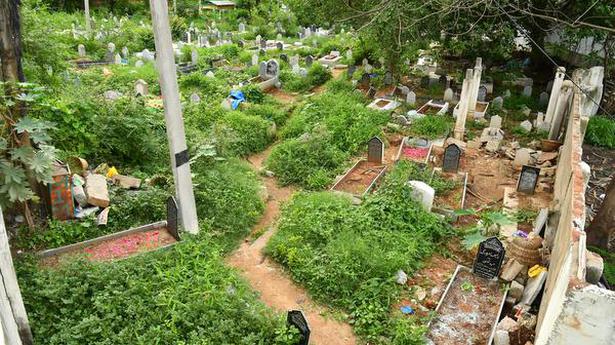 Board faced flak from State Information Commission on the subject Grave spaces for exorbitant sums of money has been a contentious issue. So much so that the Telangana State Waqf Board (TSWB), has minced no words in the recent past that burials must be provided free of charge. But it was only after the Telangana State Information Commission (TSIC) came down heavily on the board that more than five months later it issued a circular, without fanfare, directing managers of graveyards to provide free burial spaces, or face stringent action. The issue came to light when a Right to Information Act applicant Kareem Ansari, an activist working with the portal youRTI.in, received a copy of the circular from board on Thursday. At a hearing at the TSIC in February, State Information Commissioner Mohd Ameer termed the situation of charging for burial spaces as ‘alarming’ and stated that ‘oral instructions’ made by Chairman Mohammed Saleem on social media on the issue are available. He also stated that there ‘must be specific guidelines/procedure laid down by the Government or by the Chief Executive Officer’ to fix ‘nominal charges for allotting graves’. He opined that the system at the board needs to be streamlined, and action should be taken against those who have been charging kin of the deceased large sums of money for burials. The circular dated June 28, which was sent to all mutawallis (managers) in the State, apprised them that the it had come to the attention of the board that they were not allotting burial spaces, and were also charging ‘huge amounts from poor Muslims’. Erring mutawallis and managing committees were warned of severe action, with the board stating that they should provide grave space free of charge, ‘failing which criminal action will be taken against the responsible persons’. Interestingly, a copy of the circular was marked to the TSIC with a request to close the case. Speaking to The Hindu, Mr. Ansari said that issuing writing instructions is a welcome move. “For several months no written instructions on the issue were given. The State Information Commission took note of the problem and gave an order which will help several poor people who are unable to afford to bury their dead. The board should now ensure that this circular is complied with.”